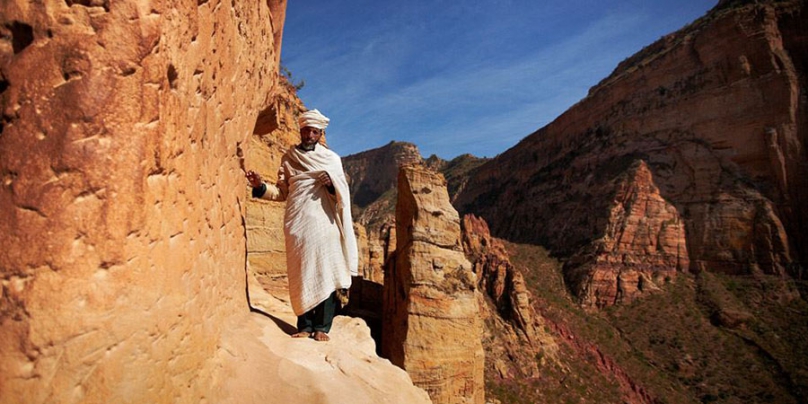 Over 125 rocks hewn churches are recorded in Tigray region. The rock churches of Tigrai do not function primarily as tourist attraction they were generally excavated using a very different method from that at Lalibela, the antiquity of most of the Tigraian rock-hewn churches remains largely a matter of speculate. Every church has its own oral tradition regarding its excavation, in many cases the church is dated to the reign of Abreha-we-Astebeha the twin Emperors of Axum who converted to Christianity in the middle of the 4th century. There are a number of explanation given as to why the rock-hewn churches of Tigrai were so often carved in to relatively inaccessible cliff face, was it for security, or for spiritual isolation, or simply because cliff face are inherently good place to carve churches and cliff face are inherently inaccessible? Certainly the mentioned facts keep away outsiders and made the rock churches intact. Some of these rock hewn churches are pre-Christian temples, which was changed to church after the spread of Christianity in the northern Ethiopia. Most of these churches are difficult to access since they are carved on the top of the cliff, thus visitors who are interested to visit have to be physically fit, the rock churches can be visited form the Mekele or on the way to Axum, from this wokroChurckos and Abreha-we-Astebeha are the most reachable. Most of these churches are found on the Gera-Alta chained Mountains Also these magnificent churches can be visited on the eastern and southern Tigray area. According to client interest we organize a special tour package which will combine trekking and camping.