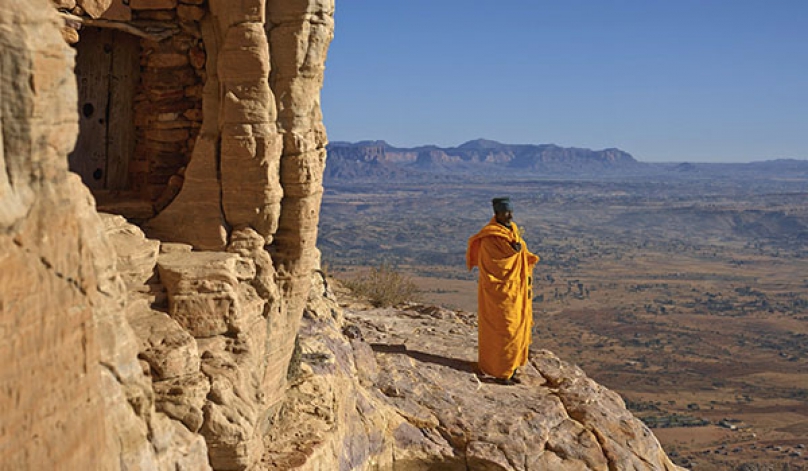 Yeha is situated in the northern mountainous section of the Tigray region. Although today this small settlement survives as a shanty town, it was once a site of great pre-Axumite civilization. Believed to be Ethiopia's first capital, Yeha was first uncovered in a complex archeological excavation around a courtyard at the beginning of the 20th C. The first settlers of this area, the Sabeans, were the founders of the Axumite kingdom.

The temple of Yeha, with one side of its walls in ruin, is otherwise still intact and testifies to the advanced level of the people of those times. There is no trace of mortar being used to build the temple of which the inside of the walls was believed to be have been paved with gold.

The archeological excavations made in 1909, 1947 and 1973 respectively, reveal that this beautiful temple was destroyed by fire. Treasures such as gold rings, golden lions, stone-engraved inscriptions written in Sabean, stone-carved animals like the Walya ibex (one of Ethiopia's endemic mammals), pottery works and others were uncovered. Some of these findings are displayed in the 4th-century church museum found in the same compound as the temple while others are displayed at the National Museum in Addis Ababa. The twelve underground formations and four other very deep cave structures (which seem to lead to Yemen, Lalibela, Jerusalem and Axum), increase the area's importance in terms of both archeological research and tourism.